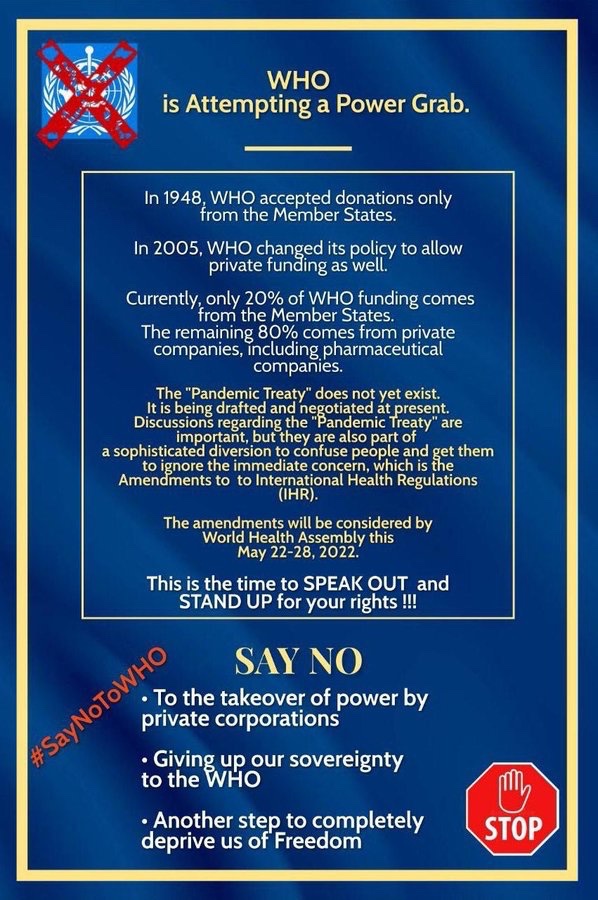 As pointed out by a real cool dude .
Sauce: u/shinobixxx @ reddit

Anyone remember voting for the World Health Organization to take control of our lives?
No? Me neither.
And yet here we are teetering on the brink of joining most of the countries of the world in surrendering our national sovereignty under the terms of a proposed new pandemic treaty.

Once British ink is dry on the necessary
paperwork, we and most of the rest of the
billions living on planet earth will, in
the event of another pandemic, take our
instructions, not from politicians we
actually voted for and could
hypothetically, at least, have the option
of getting rid of, but from the unelected
faceless bureaucrats of the WHO.

This is no conspiracy theory by the way,
no tin hats required.
This is real and happening now and a whole lot of people would rather
you weren’t paying attention.
The WHO is a fabulously wealthy offshoot
of the United Nations.
It has its head office in Geneva and is presently headed
by Ethiopian born Tedros Adhanom Ghebreyesus.

Know much about him? No, nor me.
He and it are funded by 194 member
states and also by donations from
private entities.
As things stand, most of its money comes from the United States of America, from communist China and from
computer salesman and international man of mystery Bill Gates.

Let us remember that for the past two years the WHO has loudly celebrated the
approach taken by China to the handling of COVID-19.

Even now, as tens, or perhaps hundreds of
millions of Chinese citizens remain
locked in their homes in scores of
cities across that country.
And after unknown numbers have died in those
circumstances, including some who
committed suicide by leaping to their
deaths from the tower block imprisonment -
the WHO continues to applaud the tactics
of the Chinese Communist Party, that is
its benefactor.

For his own part Bill Gates, who
struggles even to control viruses in the software sold by Microsoft,
is on record admiring the draconian approach taken by Australia to the
extent that he has said, that in his
opinion, the world would have had greater
success in eliminating the disease, - the one, that more than likely leaked
from a lab in China - if only more nations
had followed the Australian model; locked
everyone down and sought zero COVID.

Now we in Great Britain, without so much
as a buy-your-leave from our leaders and
along with around 95% of the world’s
population, must contemplate a future, in
which decisions about what we will be
ordered, ordered to do in the face of
another pandemic, will be taken by the
unelected, unaccountable, bureaucrats of
the Chinese Communist Party worshiping
WHO, under the unseemly influence of a
tech billionaire with no more
qualifications in the fields of medicine
and disease control than I have.

It’s worth remembering that president
Donald Trump insisted on divorce from
the WHO on the grounds that it was too
close to China, only for president Biden
to re-marry them again in 2021.
All of that is history however.

In a matter of days the World Health Assembly
will meet in Geneva for a vote on the
treaty.
The target date for final ratification is in May 2024 but by then the power grab will have long been completed.

Amendments written into the proposed
treaty by the re-enamored Biden administration, will see 194 nations seek sovereignty over national health care
decisions to the WHO.
The WHO would thereby have decision making power over
and above our own government and every
other government.
Consider this, when you watch footage of
the million people of Shanghai locked
down in their homes, their cats and dogs
beaten to death in the street.

The WHO would, by the terms of the new
treaty, have the power to impose the same
on cities here.
Note too, that under the terms of the
treaty the WHO does not, does not have to
show any data to legitimize its
conclusions or decisions.
It’s also worth knowing, to say the least, that it would
be up to the WHO to define what the next
pandemic is.
Seeing how things are going, I would
hardly be surprised to hear about a
pandemic of obesity or of heart attacks,
followed by the lockdowns and other
restrictions to deal with same.
No doubt lockdowns to fix the climate, can’t be far away either.
In the case of climate, the WHO might draw the
conclusion, that we, the human species, are
the virus.
Who knows what they might conclude and decide then.

Be in no doubt, this so-called pandemic treaty is the single greatest global power grab that any of us has seen in our lifetime.
It’s nothing less than the groundwork, the laying of deep foundations for global governance through the WHO.

Many of those opposed to the treaty, and there
is an online petition here in the UK,
seeking to demand that the matter be
discussed in parliament, have pointed to the, shall we say, compromised position of the WHO itself.
Much has been made of the notion that a
fish rots from the head.
Back in 2017 Robert Mugabe of Zimbabwe was appointed as a goodwill ambassador
of the WHO by Tedros and only dropped
after shrieks of outrage from those, who
pointed out that Mugabe might have been
a controversial choice of poster boy for
an organization notionally committed to
the well-being of living people.

A glance at the 34 member executive
board of the WHO reveals seats occupied
by such human rights luminaries as Syria
and east Timor, among others.
And remember all the time the links the
WHO has with communist China, a state
with more human rights abuses under its
belt than any decent human being might
want to contemplate. And that’s before we
get to the looming presence of the
world’s fourth, or is it second, richest
man?
The one and only Bill Gates and his
foundation, whos commitment to mass
vaccination is unsurpassed.

As far as I’m concerned, the whole thing
stinks like the aforementioned dead fish.
The approach taken to COVID by the
Chinese government and endorsed by the
WHO was never about health, I say, and
always about control.

Just as there is more than one way to
skin a cat, one beaten to death in a
Shanghai street by a man in a hazmat suit armed with a stick perhaps.
So there is more than one way to seek to impose
undemocratic, authoritarian control upon a population.
Just as a for instance, a government
desiring such control might try
frightening the living daylights out of
its people. Telling them that if they
don’t take their medicine that
big pharma knows in advance might kill
or maim some of them, that they won’t be
able to travel, leave the country, go to
work, or the pub, or the cinema, or to
school. A government, or indeed any unelected
body seeking total control, might tell
its people that unless they do what
they’re told, they won’t ever be getting
back to anything even resembling their
old normal lives.

That’s not how you protect people from
pandemic, that’s how you exploit and
manipulate the very notion of a pandemic,
in order to seize and retain control.
And then, while they’re either still
terrified or just plain exhausted and
demoralized by the whole damned
experience, why not slip through all
manner of new legislation shaped to mop
up the dregs of whatever old-fashioned
freedoms and rights remain behind?

I am, even by my own estimate, the
unlikeliest of rebels.
All I know, is that I have for a period,
now measurable in years, been opposed to
those in power here and also all but a
handful of those vying to replace them.
For the longest time, I’ve cared not a
jot what those jokers try and tell me to
do.
The evidence coming out now about
lockdown harms, about vaccine harms, tells
me, I was right to follow my own path.
In short, I’ve had enough of the lot of
them. They don’t speak for me or in any
way matter to me.
If this pandemic treaty comes to pass, I will disregard it.
I’ll ignore any future lockdown ordained by
any power. I’ll take no mandated vaccine,
not while I have breath in my body.
The WHO and all its little wizards can take
a running jump. The men in suits can sign
whatever treaties they want, I don’t care.
Not one of them, not Johnson, not Trudeau,
not Macron and the rest, has the stomach
for the wet work that would be required
to put their authoritarian plans into action.

We owe it to ourselves, perhaps we even
owe it to them to tell them, that they’re living in a
fantasy world of their own creation and
that we want none of it.
Let them have the gall to seek to sign away our
freedoms in such a high-handed manner.
This month or in 2024, I for one, I’m not
playing along.
As Patrick McGoohan’s character said in
The Prisoner:
I’m not a number, I’m a free man.

The greatest power grab any of us has seen in our lifetime.

World Health Assembly vote on IHR amendments in a matter of days in Geneva, Switzerland.

[Video] Russel Brand - The WHO Pandemic Treaty - What It Really Means…#

Petition - Do not sign any WHO Pandemic Treaty unless it is approved via public referendum (mentioned in the videos)
👉 https://petition.parliament.uk/petitions/614335

Dr. Tess Lawrie, she was in the public Video Call of the W.H.O. and wrote about it:
👉 https://drtesslawrie.substack.com/p/urgent-my-video-call-with-the-who